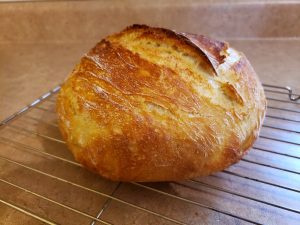 The unusual thing about many of the things I am noticing, in this strange time, is that I am noticing them at all. I think that might be true for a lot of people. When we go into the grocery stores, we notice that many of the shelves seem thinly stocked. I know that only today was I able to find yeast in my local grocery store, after weeks of not being able to find it anywhere in Brampton. I, like so many others, wanted to do some baking and there was no yeast to be found. I was also able to find hand-sanitizer yesterday; something that has been absent from store shelves for almost two months. Before that, I never really noticed how much yeast or how much hand sanitizer was available on the store shelves.

Recently, I also developed a heightened awareness of the squirrel population in my neighborhood. One industrious squirrel built a home in the engine of my car and did some impressive damage for a little critter. Since there was nowhere I could go, my car had sat idle in the driveway for seven days. Apparently, that is more than enough time for a squirrel to make themselves a comfortable home. The thing is, I never paid that much attention to the squirrels before.

On my morning walks around the neighborhood, I’ve never noticed before, how many people go for walks in the morning. I don’t think I’ve ever said good morning to so many people as I have been in these past weeks. It’s a nice thing to notice. There has been a distinct reduction in traffic in our neighborhood and a welcome increase in the sound of children playing. Just a few more things I’ve noticed only in these past few weeks.

Before March 8th, which was when we were first told that we could not share the common cup at communion, there were so many things I simply took for granted or simply did not notice. When one short week later we literally had to close the church entirely, and the weeks passed with no indication of when this would end, I noticed so many things that I usually take for granted. I don’t think I’m alone in this.

When this sometimes difficult time comes to an end, I believe some good will come from it. First, I pray that having been deprived of things we have so easily taken for granted, that we notice what we have been given and we are grateful for God’s provision. Second, that out of that gratitude, I pray that compassion, understanding and generosity towards others will grow. And third, that like the disciples on the road to Emmaus, who at first did not notice who walked with them, we will remember, with confident faith, that Christ walks with us even through such times as these; that he is with us always.

Peace be with you.